Amnesty believes that the United States can preserve its national security without sacrificing the human rights that it is obligated by international law to respect. The U.S. government is required to respect and secure human rights, to investigate all human rights violations, and to bring those found to be responsible for such violations to justice. The goals of the Security with Human Rights Campaign include ending unlawful and abusive detention and surveillance practices that violate the rule of law. The Campaign seeks to ensure accountability for torture and civilian deaths caused by air attacks and drone strikes. The Campaign opposes unfair trials by military commissions.

The military prison at Guantánamo Bay is a glaring, longstanding stain on the human rights record of the United States. Today, it continues to hold 40 Muslim men, most without charge, and none having received a fair trial.

Guantánamo Bay detainees have suffered indefinite detention without being charged with any crimes. Furthermore, since September 11, 2001 at Guantánamo and other sites the U.S. Government has repeatedly violated prohibitions against torture and other cruel, unusual, inhumane or degrading treatment. Detainees at Guantánamo Bay must either be promptly charged and given fair trials in U.S. federal courts or released to countries where they will not be at risk of suffering human rights violations. Torture and other abusive treatment of detainees must stop, and those responsible must be held accountable.

Group 11 is urging President Biden to close the Guantanamo Bay Detention Facilities, which have been unlawful since their establishment in 2002. We are urging the President to transfer for release the six detainees who have already been approved for release, including Toffiq al-Bihani (see below). All other detainees should be released or tried in civilian federal courts without recourse to the death penalty.

On October 28, 2021 at the U.S. Military Commission in Guantanamo Bay, Cuba, Majid Khan pled guilty to four terrorism charges, including delivering $50,000 to members of Jemaah Islamyah who used it to bomb the Marriott Hotel in Jakarta, Indonesia, killing 11 persons and wounding dozens more. But Khan, who had been cooperating with the government for the previous ten years of his imprisonment, was able to give the first-ever public accounting in any court of exactly what had been done to him at CIA black sites in Pakistan, Afghanistan and a third country. In a 39-page statement, Khan described being waterboarded in icy cold water, hung and shackled to a wall and chained to a beam above his head, having a puree of food inserted into his rectum, water pumped into his anus with a garden hose, and being sleep-deprived for such long stretches that he hallucinated.

The eight-man military jury sentenced Khan to 26 years. But then the jury foreman, Captain Scott B. Curtis, said that the members of the jury had been “riveted” by Khan’s account of his torture at the hands of the U.S. Government. Curtis hand-wrote a plea for clemency, based on the Government’s utter failure to observe basic due process Constitutional rights, as well as the physical and psychological abuse inflicted on Khan, and Khan’s vulnerability as a young man and his remorsefulness now.

Here is the recommendation as submitted to the convening authority of the military commission, signed by seven of the eight jurors, identified by their juror numbers, for clemency for Majid Khan.

Group 11 advocates for the transfer of Toffiq al-Bihani, a Saudi Arabian citizen who has been held in Guantánamo without charge or fair trial since 2003. The US Senate Intelligence Committee’s report on CIA “black sites” found that al-Bihani had been subjected to torture during his confinement. The US government has long since made it clear that it has no intention of charging him, it has no intention of charging him, and indeed he has been cleared for transfer since 2010.

The US government’s use of indefinite detention without charge as a response to 9/11 has been unlawful from the outset. This detention regime must be brought to an end, and any proposal for its continuation or expansion condemned. 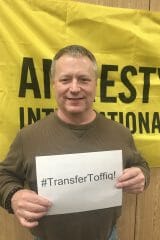 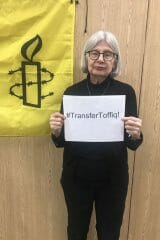 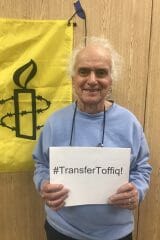 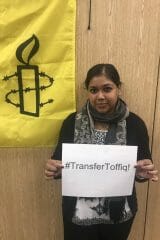 Learn more about the Security with Human Rights Campaign.