Group 11 is considering sponsoring Justice and Dignity for the Women of the Sahel (JDWS). JDWS is requesting $1,000 to implement protection and gender-based violence (GBV) programming in the Sahel of West Africa. This new organization will use this funding to conduct a program needs assessment of GBV prevention and response in Mali, the current organizational focus. Volunteers with a variety of skillsets are welcome.

Founded in 2019, this nascent organization aims to contribute to the promotion of the status of Sahelian women through full and active citizenship and wellbeing. The founder and president of JDWS, Aida H. Oualate, was born in  Kayes, Mali and is a survivor of the civil war in the north in 2012. As communication director for the Government of Mali, she worked to combat corruption in the financing of development initiatives in Mali. She holds a Masters of Business Administration in project management and has served as a liaison for cross-sector international organizations in both Mali and the United States. Aida currently resides in NYC. She is supported by three local volunteers in Mali, nine board members, one volunteer technical advisor, one IT technical advisor and a network of over 130 volunteers. For more info: JDWS Project Summary / JDWS Proposed Budget / JDWS Volunteer Needs

Group 11 pays special attention to the Central African Republic since we have a member from that country who led human rights activities there and was persecuted. At present Amnesty’s focus is on the demand for accountability of former political leaders in CAR who are responsible for vast human rights abuses during and after the recent civil war. If such perpetrators are not brought to justice, others will think they can get away with it too.

There are a total of 14 armed groups who signed a cease fire with the government, which pays them off, but they don’t respect it. They use the money to buy more weapons from Sudan, Chad, etc. Meanwhile, the national Army is still under an embargo by the UN and cannot buy sufficient equipment to protect civilians or control the territory. The so-called rebel groups take civilian hostages and do illegal economic activity such as mining for diamonds and gold. They control some 80% of the country and extort taxes from local populations as well as their livestock. They have burned down many villages and killed many civilians including priests and police officers.

Group 11 sends letters to US officials such as the Secretary of State and the Assistant Secretary heading the Bureau of African Affairs, calling upon the US government to be active in the campaign to end impunity for war crimes perpetrators. We also call upon the US and UN to strengthen international peace keepers in CAR, who are not there in sufficient force to protect civilians. In addition Group 11 contributes funds to buy school supplies for children, since many families cannot afford the costs of sending them to school. 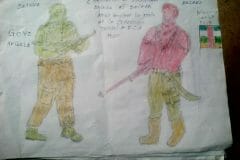 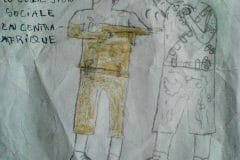 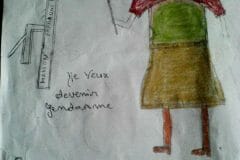 Above, drawings by C.A.R. schoolchildren reflect the trauma they have witnessed

In most places these armed groups would be called “terrorists.” This has been going on for years now. The rebel leaders want to be given ministerial positions in the government, instead of being judged for their crimes against humanity. The US should help the CAR government regain control of the country and hold trials for war criminals, ending their impunity.

Since March 2015, the beautiful and richly historic country of Yemen has been ravaged by war between a Saudi-led coalition and Houthi rebels, with many other countries, including the USA, supporting sides and supplying weapons. Horrific human rights abuses and war crimes are being committed throughout the country by all parties to the conflict. An estimated 10k to 50k civilians have been killed by conflict, 3 million people forced to flee their homes, 1 million cases of cholera, and hundreds of people dying every day of starvation and preventable diseases.

All parties to the continuing armed conflict committed war crimes and other serious violations of international law, with inadequate accountability measures in place to ensure justice and reparation to victims. The Saudi Arabia-led coalition supporting the internationally recognized Yemeni government continued to bomb civilian infrastructure and carried out indiscriminate attacks, killing and injuring civilians.

The Saudi Arabia-led coalition has imposed an air, land and sea blockade, completely shutting off most major entry points. A high priority for the people in Yemen is for the Saudis to open the ports and allow food, medicine and humanitarian relief into the country. We urge you to write your representatives and request pressure on the Saudis to allow aid to reach civilians who are in desperate need.

Amnesty International’s Urgent Action case in Yemen is in support of Nabeel Rajab, prominent human rights defender and prisoner of conscience who was sentenced to five-years in prison for “spreading false rumours in time of war”, “insulting public authorities” and “insulting a foreign country” in relation to peaceful tweets about the war in Yemen. Index number: MDE 11/9566/2018. Read more about it here.

For more information: Saudi Arabia: 10 things you need to know about a kingdom of cruelty is a recent article that mentions Saudi’s role in Yemen.

An independent Yemeni organization called Mwatana for Human Rights advocates for human rights through the verification and documentation of violations, provision of legal support to victims, lobbying, as well as awareness raising and capacity building.

Journalist Ebrima Manneh was arrested in July 2006 by officers believed to be from the National Intelligence Agency (NIA). He has been missing ever since. There are conflicting reports for the reason of his arrest. According to some sources, he was arrested following a disagreement with the managing editor of the Daily Observer, a close ally of President Yahya Jammeh. Other sources claim that he was arrested after he attempted to give information to a foreign journalist that was deemed damaging to the country’s image. And finally, other sources link his arrest to his alleged attempt to print a report critical of the government in the Daily Observer.

While the exact reason for his arrest is unknown, it is clear that Ebrima Manneh is a prisoner of conscience, detained solely for peacefully exercising his right to freedom of expression. Group 11 is deeply concerned about his safety and, as a prisoner of conscience, calls for his immediate and unconditional release. [Update, July 2017 – Amnesty International now believes that Mr. Manneh is deceased and is calling for justice for his killers.]