On Tuesday evening, January 26, 2021, Group 11 held its first virtual Write4Rights event. The focus was on five cases: families in U.S. Immigration, Customs, and Enforcement (ICE) detention centers, whose health, safety, and right to pursue asylum are at risk; Jani Silva, an environmental defender in prison in Colombia; Idris Khattak, a human rights researcher who was disappeared in Pakistan; Nassima al-Sada, a women’s human rights defender in prison in Saudi Arabia; and students imprisoned for holding a peaceful Pride demonstration in Turkey.

Sandi McMullen, who organized and led the event, provided participants with information and short videos on each case, after which they had time to sign and prepare envelopes. (Some participants had asked that letters and stamps be sent to them beforehand; others had downloaded and printed the letters themselves.) We were able to take several breaks during the event as we listened to talented group members: Marsha Eckart gave us a piano performance, Todd Schwarz sang and played guitar, and Lynne Sharon Schwartz read us her poetry. The evening ended with a rousing Karaoke rendition of “Teach Your Children Well” by Crosby, Stills and Nash. In all, we sent 98 sets of letters, for a total of 490 letters. 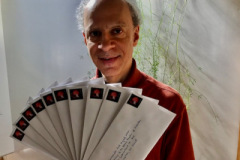 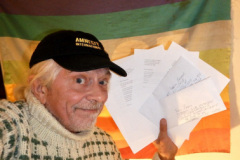